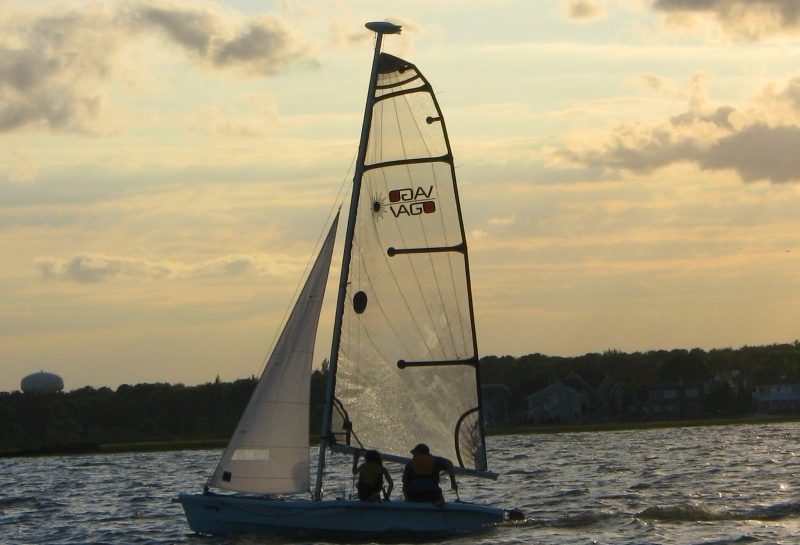 Having just returned from vacation and then visiting friends in New York City until late the night before, we got quite a late start.

By the time we got the boat launched, I wasn’t even sure that we had enough time to sail. Jen really wanted to though, so we decided to just tool around on the jib and not invest the time to prep the main. I think we both wound up wishing that we had more time though: the bay was mostly empty, the breeze was steady, the sun was setting making everything kind of glow and it was one of those evenings where you feel like you could just keep sailing on forever.

We wanted to preserve a little daylight for anchoring and getting the boat set up, so we sailed back to the cove behind Berkeley Island. We payed special attention to anchor opposite of pier so that we wouldn’t be awoken by screaming kids with crab lines at dawn. With no one watching, we were easily able to set the anchor on the first try, and we settled in. I brought some tools to move the downhaul cleat that prevented us from raising the poptop last time, so we were able to, uh, raised the roof.

We had a light dinner of chicken ceasar salad and fresh bread and I played a little boat guitar as the sun set over Trixie’s, leaving a pink sky to the east with clouds in negative. 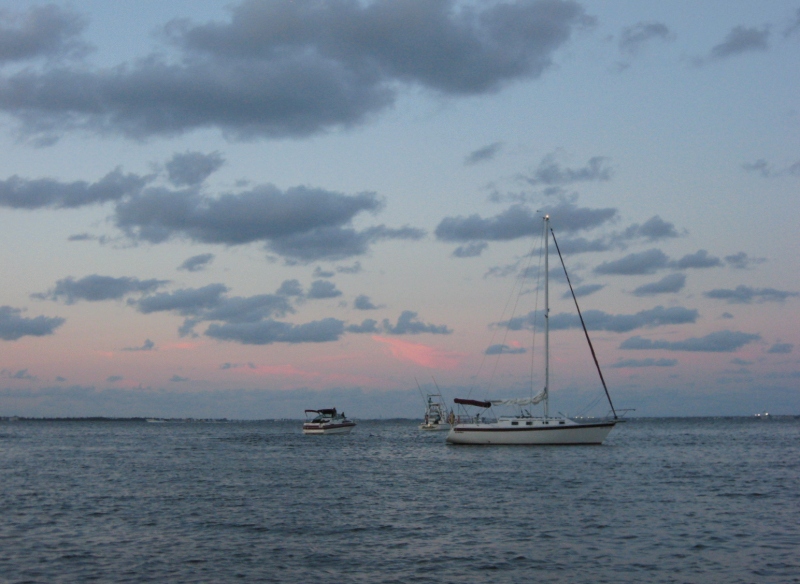 The boat stayed put overnight, and the battery kept up with the LED anchor light. I turned if off at dawn and went back to sleep.

When Jen woke up, I went for a swim. It was sort of a salty shower equivalent, and going for a morning swim from my boat has always been something I envisioned doing (not sure why). The water was much colder than the last time we swam, which at least chased off the jellyfish. Jen got in briefly, but it was too cold for her. During our leisurely breakfast and waking up period, we saw some Windjammers beating back from Silver Bay. They had returned from a big cruise to Block Island the night before and some of the club members who couldn’t make the cruise had met them in Silver Bay to welcome them back. Jen and I considered joining them, but it seemed far and we’ve never sailed under the Route 37 bridge (or asked that it be opened) because we weren’t not exactly sure of our boat’s hight (which I now know is 29′ 1″ + antennae). At any rate, it was nice having our awesome new $12 binoculars to identify boats at a distance.

We set sail for Toms River, determined to see how far we could sail into it. Someone told us that there were good anchorages back in there, so we thought we’d try to scope them out. We had a great sail up under building clouds, with no problems other than the usual boat wakes in the marked channel around Good Luck Point. We jibed around 36 and sailed into the river, pretty much as far as we possibly could have. The river narrowed to a small channel near Cedar Point (if I was reading my chart correctly) and we decided to turn around. We came about and started heading back as the south winds started picking up and the sky grew darker.

We couldn’t point high enough to head straight out, and with the traffic we had to tack constantly to get around things safely, which was kind of fun right up to the point where it wasn’t. We got hit by a couple hearty gusts, still with no reef in, and decided to motor out. Of course we got the roller furling stuck again, but instead of panicking this time, we fairly calmly started the motor, doused the main, then went to look at it when we were firmly in control of the boat. All Jen had to do to fix it was to rotate the drum. I’m not sure why that didn’t just happen by itself when I pulled on the furling line, but at least it wasn’t the kind of hassle that would have required us to untangle or re-run the line.

I had originally thought that we might put up a reefed main once we got to the mouth of the Toms and were out of the close quarters of the river, but as we approached the bay and our shelter to the south got thinner, the winds picked up dramatically. There were a couple sailboats over 30′ ahead of us that were sailing uncomfortably, and before we cleared the point, they were all firing up their engines and taking down their sails. We decided to motor back, which was by far our longest motor cruise ever—not really a milestone I’ve been looking forward to breaking, but I think we made the right call as it was ROUGH on the way back and we would have had to tack back against it the whole way. The only boat we saw under sail was a big Hunter 44, which was sailing with a full main and partially furled head sail. It proceeded to summarily kick our asses even after I went to flank speed on the ol’ Tohatsu.

The motoring back was a soaking affair with the bow constantly driving into waves and firing sheets of spray over the whole boat, but as we’ve said before our boat is tough, and it was mostly just annoying. Jen stayed below, getting things organized, and I drove on through the spray without my foul weather gear—because the conditions only warrant foulies when I don’t have them.

Although it would have been nice to sail back in 12kts and sunny skies, we had another successful overnight on the boat, and had a lot of fun in the process.