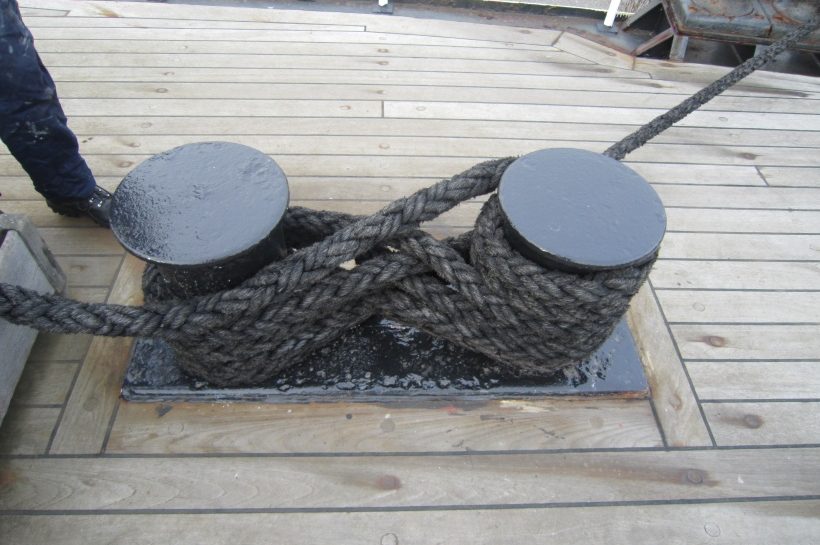 For the lips of an immoral woman drip honey, and her mouth is smoother than oil;
But in the end she is bitter as wormwood, sharp as a two-edged sword.
Her feet go down to death, her steps lay hold of hell.

The term “bitter end” is usually thought to be of nautical origin. Bitts are the large posts that act like cleats for tying ships to docks and things, and the bitter end of the rope is presumably the part of the rope that is secured to the bitts.  A similar usage is from the British Navy, where the end of the anchor rode is connected to bitts inside the ship with a bitter pin. It’s used commonly in modern nautical lingo to mean the very end of any rope: Chapman’s Piloting and Seamanship says that it’s “the extreme end, the end made fast when all line has been paid out.” However, some people think that it may predate these usages and come from Proverbs. Far be it from me to come between nautical lingo and immoral women. But in the modern idiom, there’s no denying that we’re getting down to the bitter end of the sailing season.

We went sailing with Jen’s parents. Jen’s mom offered to bring lunch and as we loaded in the third cooler I felt confident that we could have survived for a month if we’d been lost at sea. As it turned out the winds were light and we were more likely to have stalled out within paddling distance of the marina than been swept out the inlet. Given last week’s 38kt Frostbite Race, I wasn’t sure that I’d see the last few inches of our genoa again this year, but the fall winds are apparently more fickle than strictly brisk and we flew every scrap of canvas.

We couldn’t quite get to marker 39 before the northwest wind completely died. I proved that you can’t heave to without wind as Jen went below to make sandwiches. She started running through the potential fixin’s in rapid succession, but I couldn’t get past the third bread choice without having to tack the jib or handle the mainsheet as the boat spun through the occasional boat wake, so I had her use her judgment. I also tended to the boat, since I had, uh, forgotten to reattach the outhaul—we’d been reefed down for so long on the last trip that I removed it to keep the end from dangling on our heads. Not that we needed to be particularly worried about flattening the sail in those conditions.

The wind did come back after lunch, though this time from the northeast, meaning that we’d have to continue beating to make the turn around Good Luck Point. We sailed up to 36 before turning around and heading back. I had originally intended to go to Toms River, but we just weren’t getting anywhere and I wasn’t sure how early Berkely Island Park was locking the gate where my truck was parked.

We had enough wind to move the whole way back, and Joe took the helm for a good chunk of it. He seemed to get it without too much instruction.  The wind clocked around to the southeast, or perhaps it was just so light that it was the apparent wind that was following us, but we were on a close reach most of the way back toward Trixie’s.

I don’t know if this was some kind of boat dressed up for Halloween or what, but as we approached Berkeley Island we saw a crazy Viking boat cruising around. Or maybe it was a variant of a Greek bireme. Technically, it didn’t really look like either. It was gaff rigged (probably not period correct, if it did indeed belong to a particular period) and had a bow that rose far up out of the water and turned back toward the stern with what seemed like an elaborate figurehead. We were too far away to get a good look (or a picture), but I really want to find out what it was.  I tried to turn to intercept, but got stuck in irons after getting the tiller stuck in people, and it was determined that we were losing light at too fast a rate to continue pursuit.

At the dock, Jen’s mom did get some good pics of the boat at magic hour, with some rich visual warmth from the setting sun despite the cool air temperature. 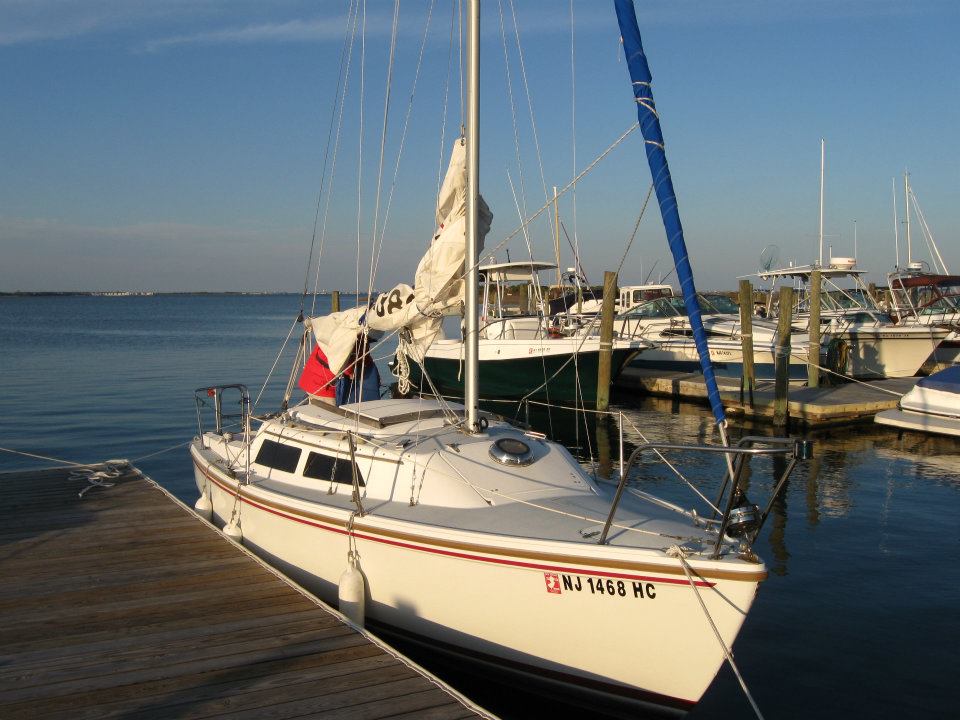 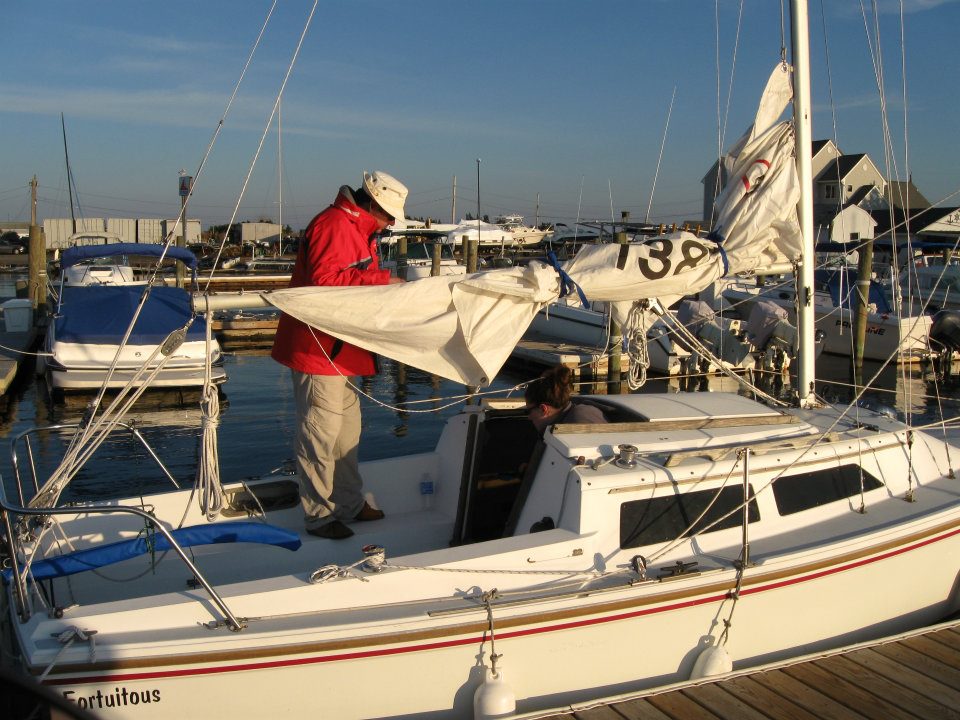 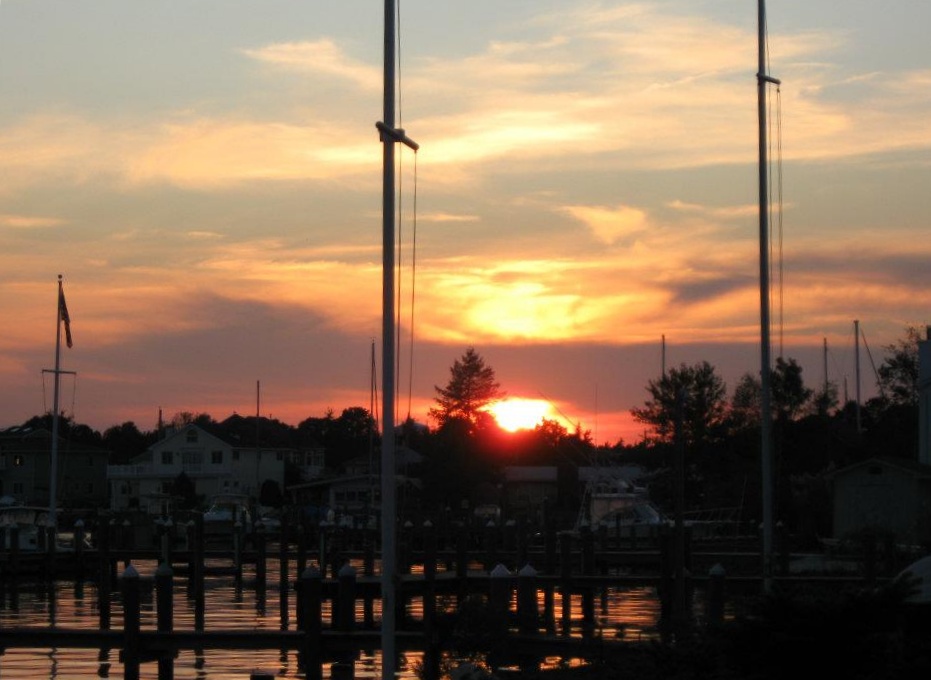 Although the days are shorter and we’re sailing in jackets and long pants, we’re not quite ready to give up on the season yet.  Whether it implies the last of the anchor chain or the taste of wormwood and nefarious ladies, I hope that we’ve got a little more to pay out before actually reaching the bitter end.