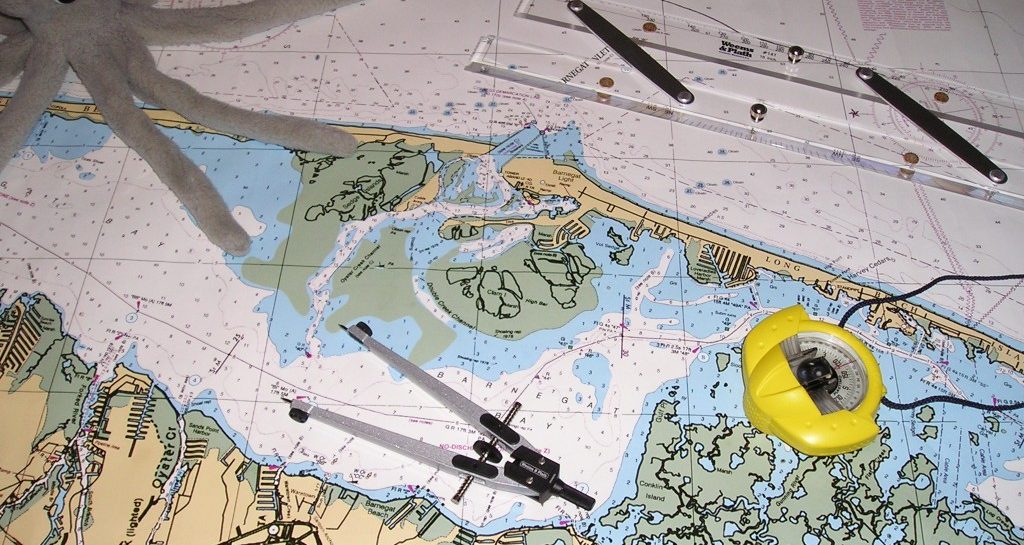 Opinions on how much navigational knowledge one needs to safely operate a boat on protected waters run the gamut from “meh” to some variant of “Farewell and Adieu to you Fair Spanish Ladies.” Although we’ve been sailing around with paper charts, a telephone, and our eyeballs for some time without much incident, I’d like to know more.

Most people figure out where they are with electronics—things like GPS and chart plotters. The saltier sailors will go on about the fallibility of electronics when they’re most needed, and how the government could pull the plug on GPS at any time (and indeed, the marine community has been closely watching an FCC decision on whether or not a tech company could borrow some airwaves that might interfere with GPS signals), but those aren’t really my concerns at the moment. We don’t have the space, the electrical capacity, or the funds for a chart plotter on Fortuitous (beyond the “not for navigation” one in Jen’s telephone), and honestly the bay is well-marked and easily navigated without much assistance. The long-term goal, however, is to sail beyond the bay, and while we’ll probably have a chart plotter on board when that day comes, I’ll feel better knowing how to do traditional coastal piloting. Not to mention that I’m simply interested in nautical esoterica.

Piloting is a subset of navigation that deals with determining your position based on fixed references. If you know you’re pointing at buoy BB and you can measure the angle to Barnegat Light or a water tower or something else on the chart, you can plot your relative position to these things and make a good guess as to your location. Piloting is used when operating close to shore and often in conjunction with things like dead reckoning (using time, speed, and direction to figure out where you should be). Celestial navigation (using the angles of things in the sky to determine your position) can be done almost anywhere, but really excels offshore, where there are no landmarks to reference.

So here’s what I’ve got (in addition to charts, pencils, and erasers), which I’ve collected based off of my initial readings in Chapman’s Piloting and Seamanship and from the kits recommended for introductory piloting courses: 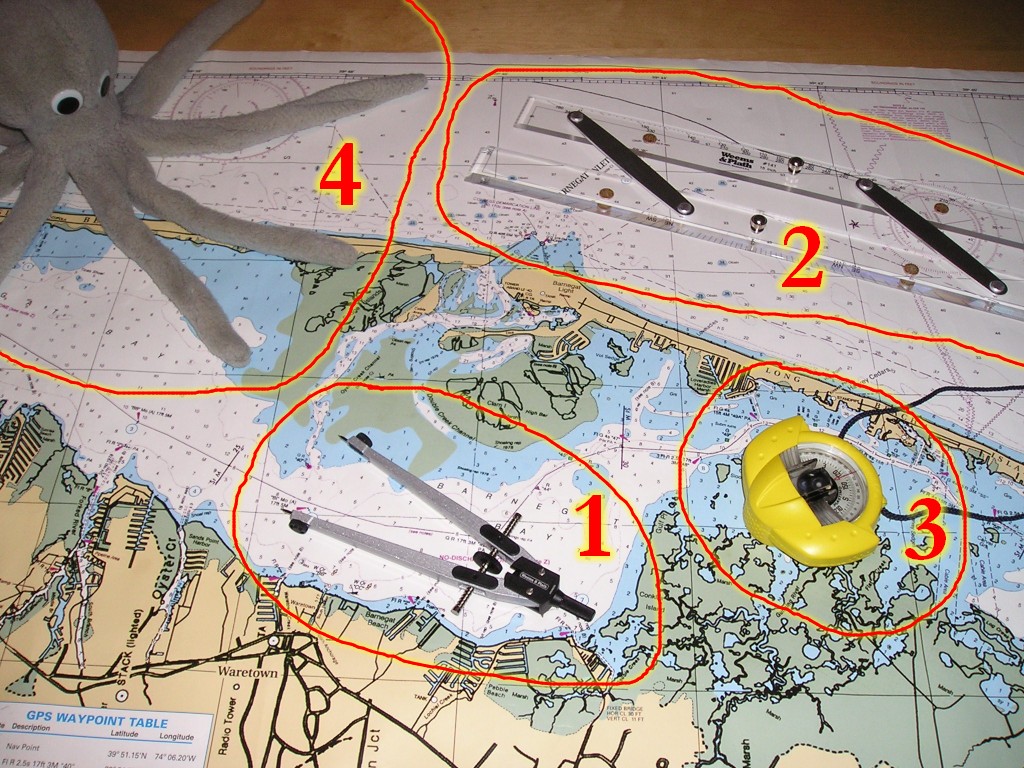 I’m going to see how much navigation I can pick up with my books and Internets, although I may wind up taking a formal course at some point. I think it’s a good skill to know. It feels like proper seamanship and it’s arcane enough to hold my interest. By the time we get a bigger boat, I’ll probably be able to pick up the US, Russian, and European satellite positioning systems and communicate directly with the ghost of Steve Jobs with an iHead brain implant (Apple: Bringing Proprietary to your Pituitary), in which case I’ll definitely be using paper charts, but for now this should just be fun to learn.

2 thoughts on “Navigation and Sea Monsters”