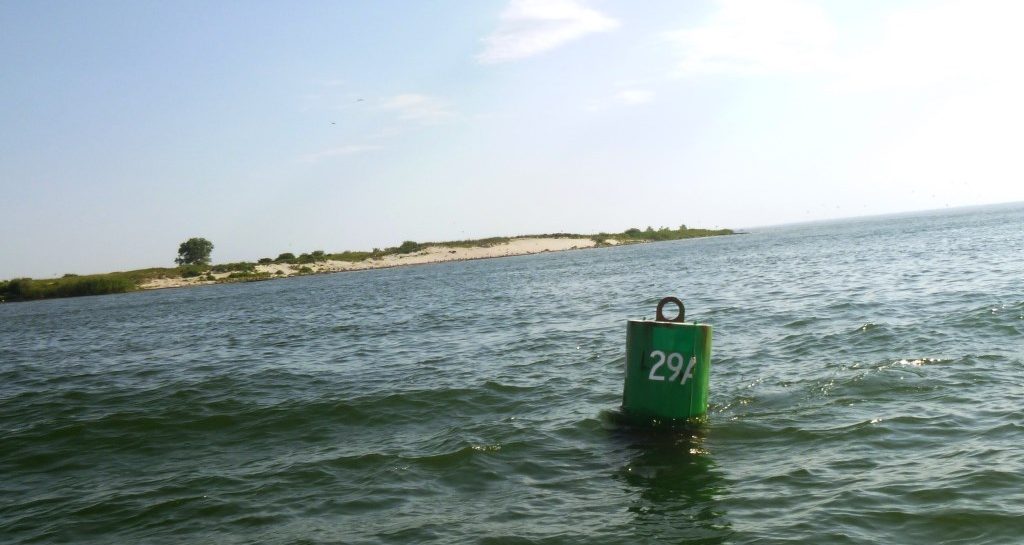 Maybe I’m becoming more antisocial…or, ok, as I definitely become more antisocial, I start to consider things like “let’s see this movie when it’s on its last legs at one remaining theater within a hundred miles” to avoid human interaction, but when it comes to sailing, sometimes you just have to go.

We slept in on Saturday and took our time getting our stuff together. The weather was nearly ideal: clear and warm with low humidity—meaning that every shoobie from here to the Lehigh Valley piled into their Wagon Queen Family Truckster for a day at the shore. There was a 15 minute backup just to get from Piney Highway 70 to Nowhere Route 539.

The water was equally crowded. We had considered sailing north, either to Toms River or beyond, but the predictions for Sunday were for southerly winds and they were just easterly enough at the time that we could sail south the length of the bay on one long tack. Myers Hole seemed like the obvious choice.

Slack water at the inlet was at 1750, and it was late enough by the time we got to the Oyster Creek Channel that I thought we’d be able to manage. The current was ok, but the channel has been severely shoaled in since last year…the marks are all over the place, and there were lots of very shallow and narrow spots—and it seemed like every time we were in one of those, two 50′ sportfishers would try to squeeze through side by side at 25kts, throwing up Catalina-swallowing wakes. 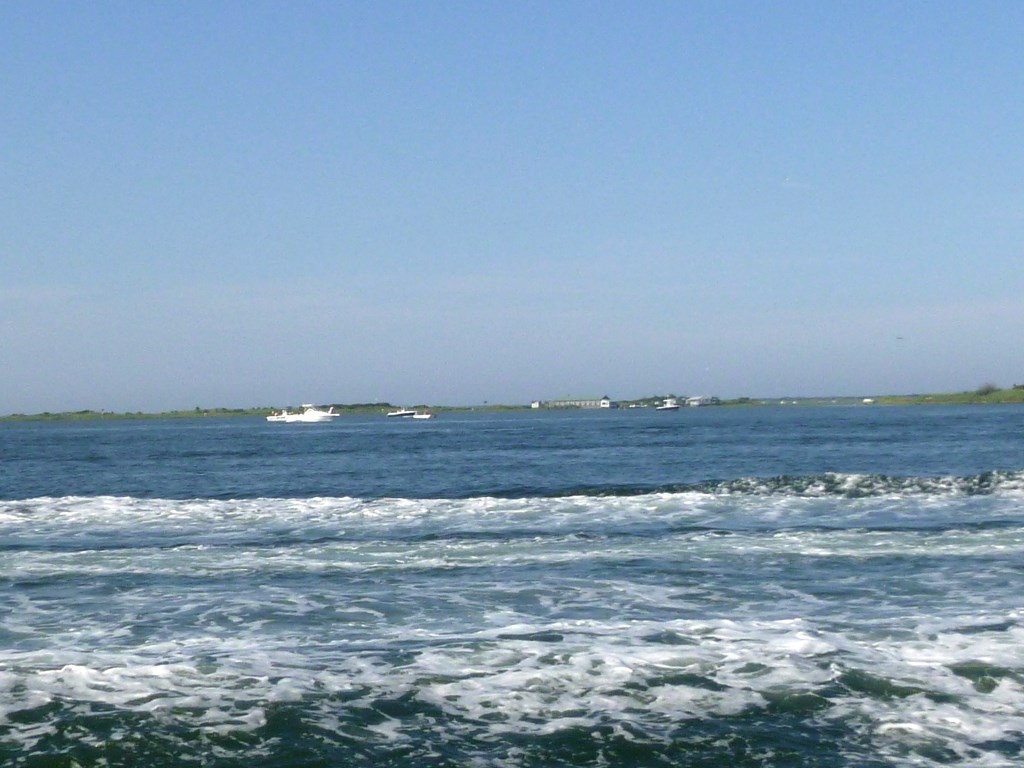 It’s always worth it though once you come around the last bend in the channel and see the full height of the lighthouse and the ocean just past the inlet.

Surprisingly, there were few boats in the anchorage, and about half of them would leave before it got dark. We anchored and went for a quick swim. Jen made breakfast-for-dinner while I messed with the anchor and kellet. We spent a lot of time lounging in the cockpit as the sunset evolved. At times, the sky was more intense than an inspirational knick knack from a truck stop gift shop. 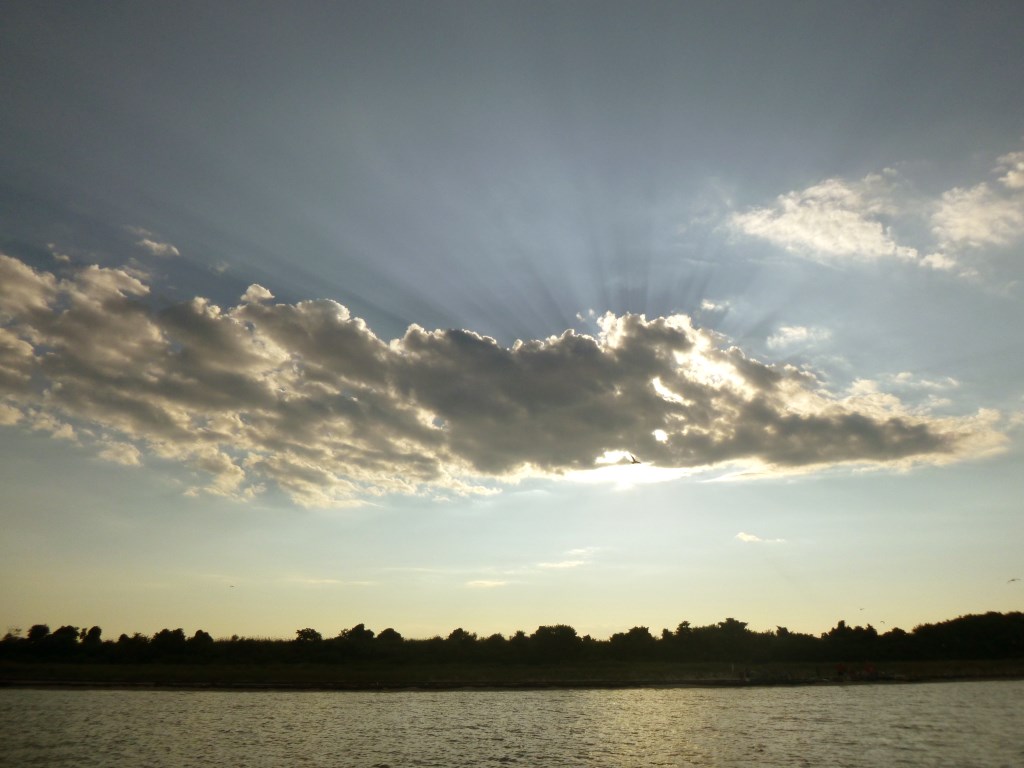 We went to bed soon after it was dark, making it unusually early by land standards but normal for the boat. The wind remained around 5-10kts overnight, but we were sailing a lot at anchor—probably exacerbated by the current, which was running opposite the wind direction for much of the night. As a result, we weren’t getting great airflow through the hatch and I decided at some point to go up and sleep in the cockpit, using only a beach towel for covers. This worked surprisingly well. I was lightly roused by the pre-dawn light, but just enough to take a picture and go back below to curl up with Jen. 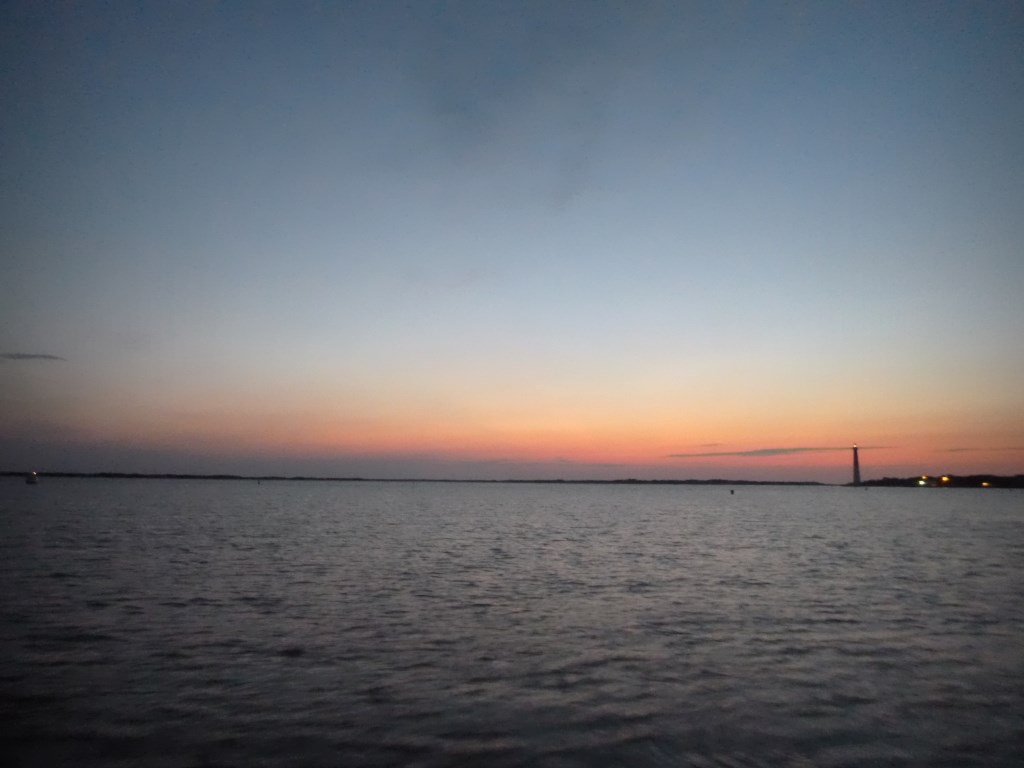 Much later in the morning, Jen made toast and I went for another swim, hoping to discern some difference from yesterday’s water on the opposing tide. We lounged some more, waiting for a favorable tide and current to leave. Around noon, we started making preparations to depart. The wind had picked up quite a bit so we tucked in a reef, then pulled the anchor and hoisted the main in tight quarters among drift fishermen, sea kayaks, and some anchored cruisers. I think we pulled it off without freaking out the locals too much, and made our way back toward the bay. 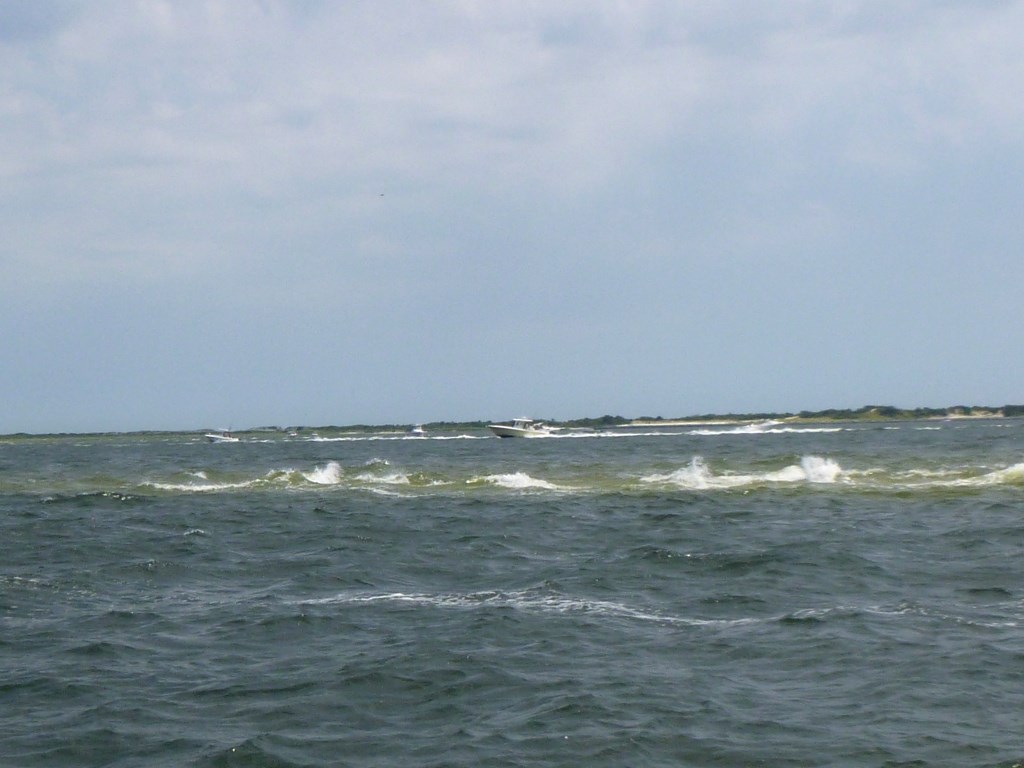 In contrast to the relaxed morning, the channel was a singularity of stupidity, with a stream of powerboats so dense and single-minded of purpose that it was as if they were giving out free Coors Light and unfortunate tattoos to the first thousand boaters to show up at the final buoy. I think I may have even referred to one as a “so-and-so” when he passed so closely that his bow spray came over our coaming. At one point we were cut off by a kitesurfer, which, while still inconsiderate, is a fight he probably would have lost had he hit us. We were motor sailing, and I guess he may have thought that he had right of way (assuming he was thinking at all), but I stood on as a vessel constrained by draft in a marked channel and calmly asked Jen if she had her knife. In retrospect, she probably thought that I was asking her to prepare to repel borders, but I was actually imagining us accidentally drowning him by his own kite strings when he got hopelessly tangled in our rigging. He made it, barely, and then appeared to be tacking around for another pass until I looked him off with an extended “you stupid so-and-so” stare.

And then we started bumping along through the mud, well inside the channel. We powered through without getting truly stuck, but it was not a comfortable feeling. Our charts were useless and it was pretty much just a matter of picking a direction and hoping there was water there, while every manner of twin-engine party barge, drunken bikini conveyance, and turbine-powered offshore penis pump swarmed around us. 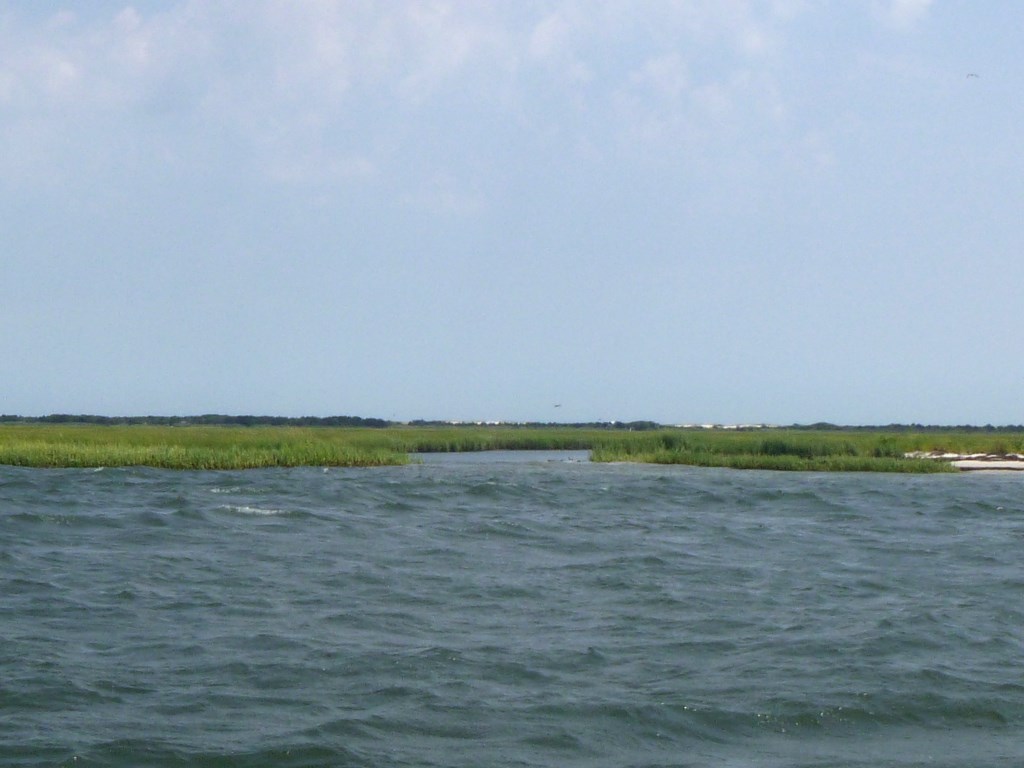 Once we got out of the channel I shut off the engine and we sailed on to BI on just the reefed main, which gave us a moment to unwind a bit. The wind in the fat part of the bay was stronger and kicking up steep chop. We turned sharply to starboard and unfurled the jib to sail wing and wing. If we had been racing, I would have put up the whisker pole and stuck it out—we could have sailed a straight line to BB—but with the sea state as it was, it seemed like we were begging for trouble. I had Jen check the navigation while I jibed the main over in a controlled fashion and cracked off onto a broad reach. That greatly reduced the chance of an accidental jibe and had the positive side effect of taking us away from the majority of the motorboat traffic running up and down the length of the bay. Despite these precautions, it was still a spirited sail and we made excellent time, making it to the creek with one more jibe just before Tices Shoal.

For some reason, things got squirrely when we tried to pull into our slip. We’d never previously had any problems docking at our marina in any sort of weather and I have no idea what happened, but I guess things can sometimes just get out of hand. We recovered (with some help from the crew of Daylight) without actually hitting anything, despite our boat’s best attempts to occupy our neighbor’s slip. She’s probably jealous of our slipmate’s brightwork.

But honestly, despite a few glitches (it’s always more fun to catalog the catastrophes), this was a great weekend away. We got in some much-needed relaxation time, had a wonderful stay at a surprisingly empty Myers Hole, and when tested, we successfully navigated the treacherous waters between confidence and hubris. As always, I’m looking forward to more sailing adventures to come…especially knowing that we’ll be out there well after the hordes have receded.

More photos are in the gallery here: /gallery-high-summer-myers-hole-2015